Unlike the other report generators, a script in FastReport contains only what you write yourself. In a script, you can:

When launching the report:

Scripts are mostly used for creating object event handlers. To create an event handler, select the required object. On the Properties panel, click on the

Double click on the required event. FastReport will add an empty event handler to the report code:

The Report object also has events. There are two ways to select this object:

To remove an event handler, pick an event on the Properties panel, select an event name and press Delete:

Each report object has several events, to which you can assign a handler - a method from the script. For example, you can filter entries in the handler bound to the Data band, i.e. hide or show in the band depending on certain conditions.

Let's take a look at creating a report and the events that are generated at it. As an example, we will use a simple report with one page, one band Data and two objects on the band:

Next, the Data band rows are generated. The sequence of actions:

Thus, using events of different objects, you can control almost every aspect of report generation. To use events correctly, you need to fully understand the process of generating bands. Most of the actions can be performed using only the BeforePrint band event – any changes made to the object will be immediately displayed. But you cannot tell in this event on which page the band will be displayed if it is stretchable because the band height is calculated at step 6. You can do it using the AfterLayout event in step 7 and the AfterPrint event in step 10; if you use the latter, the band will already have been generated and actions with objects will not have an effect. You must clearly understand when each of the events is called and use the most appropriate ones.

In a script you can refer any .NET objects, which are defined in the following assemblies:

In addition, you can use any objects, defined in FastReport assemblies. If you need to access another assembly, add its name to the list of the report assemblies in Properties - Report - Script - Referenced Assemblies.

You can refer it in the script like this:

If you add the using Demo directive to the script, you can make the function reference shorter:

To refer report objects (e.g. Text) use the object name. The following example returns the height of the Text1 object:

By default, the report units of measurement are pixels. Keep that in mind when referring to such object properties as Left, Top, Width, Height. To convert pixels to centimeters and back, use the constants, defined in the Units class:

Unlike FastReport expressions (for more information, check this link), in a script, you cannot use brackets to refer to report data. Instead, the GetColumnValue method of the Report object is used, which returns the field value:

As you can see, you need to specify the data source name and its fields separated by full stops. A source name can be composite if you refer the data source using relation. For more information, check this link. For example, this way you can address a field of a linked data source:

To make the work easier, use the Data panel. You can drag data elements to the script from there, while FastReport automatically creates code for referring the element.

To refer the data source itself, use the GetDataSource method of the Report object:

You can find information about the DataSourceBase class methods and properties in FastReport.Net Class Reference Help. Usually, this object is used in a script like this:

To refer a system variable, use the GetVariableValue method of the Report object:

The list of system variables is displayed on the Data panel. You can drag variables to the script from there, while FastReport automatically creates code for referring the variable.

To refer a total value, use the GetTotalValue method of the Report object:

The list of total values is displayed on the Data panel. You can drag total values to the script from there, while FastReport automatically creates code for referring the total value.

You can refer to a total value once it has been calculated. Usually, a total value can be used when generating the band where it is placed.

To refer a report parameter, use the GetParameterValue method of the Report object:

Parameters have a certain data type. It is specified in the DataType property of a parameter. Keep this in mind when referring a parameter. Parameters are displayed on the Data panel. You can drag parameters to the script from there, while  FastReport automatically creates code for referring the parameter.

To change a parameter value, use the SetParameterValue method of the Report object:

Example 1. Changing the display of an object

This example shows how to change the object text depending on its value, using:

For the object that displays the product price add the BeforePrint event handler:

To insert the value of the Products.UnitPrice field to the script, drag it from the Data panel. This line will be added to the script:

The web page of the report will display all the products with price more than 20 red: 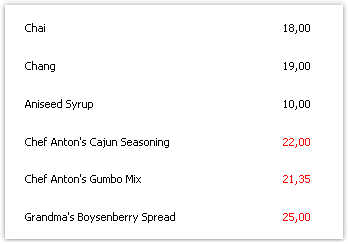 This example shows how to calculate a total value, using:

Create a report similar to this one:

In the script, declare the total variable and add the BeforePrint event handler to the band:

You can add the Products.UnitPrice table field to the script by dragging it from the Data panel. 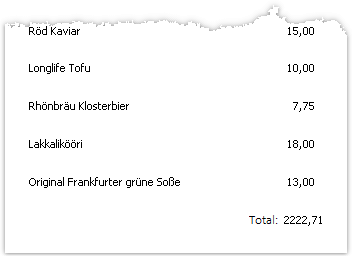